Get the latest on FEA/CFD IT news.
Subscribe now!

All TotalCAE public and private cloud solutions are powered by TrueCore. No Hyperthreading technology is used. This is one of many similar tuning TotalCAE public cloud systems utilize by default to reduce run-time for our customers. This is especially important when paying “by the hour” for the hardware as well as “by the CPU application licensing” for these resources to minimize cost and maximize performance.

Public cloud system can achieve good performance, but requires more tuning for CPU, disk, networking, and kernel drivers than a typical on-premise system due to the more complex nature of public cloud systems.

TotalCAE public (and private) cloud clusters are tuned to outperform by several orders of magnitude the default out-of-the-box cloud configuration, as well as competitive solutions that don’t do the same level of tuning and optimization.

For example, many customers are not aware that Amazon AWS (a popular public cloud provider) does not out of the box use real CPUs, but use what AWS coins as a vCPU. For on-premise systems, realize Intel CPUs have HyperThreading enabled that must be similarly disabled.

A vCPU may sound just like a real CPU , but in fact a vCPU is actually a “hyperthreaded” CPU core. What does Hyperthreaded mean? That means the each “real” CPU is split into two “logical” CPUs as shown below: 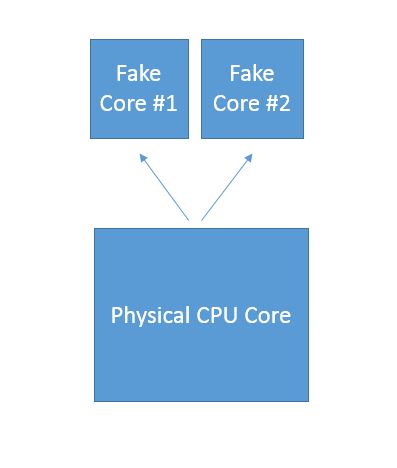 So what your application sees as two CPU cores, in reality is just one real CPU core.

For nearly all FEA and CFD codes, this hyperthreading results in a dramatic reduction of performance. Since most FEA/CFD applications are licensed by CPU cores, you are basically paying 2X for 1/2X the performance with this default configuration.

While both use the same amount of LS-DYNA licenses, the default 160 vCPU configuration is three times slower than the 160 CPU TotalCAE TrueCore simulation.

In summary, public cloud systems are not identical to how on-premise systems are tuned and require special expertise to achieve peak performance. TotalCAE Public Cloud and on-premise HPC systems powered by TrueCore include all of the required tuning to achieve optimal performance for your engineering applications.